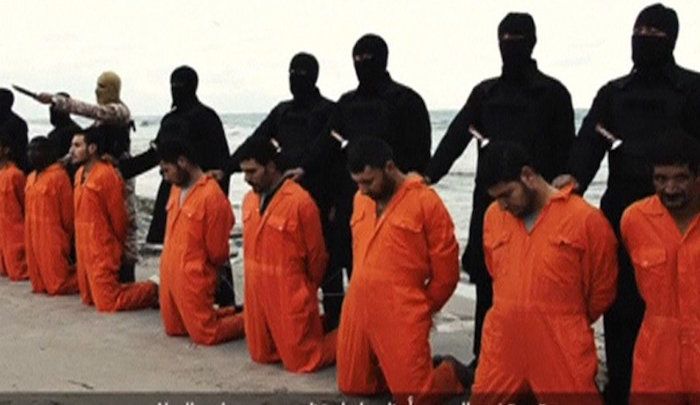 To propose that the solution to Muslim killings of non-combatant civilians rests with Muslim leaders declaring anyone who does such a thing will go to hell is a product of a delusional mind or the fantasy of an ignorant naive dreamer who is unfamiliar with the fundamental bases of Islamic violence. Here are a few fatal flaws in such a pontification.

* Muhammad is long dead. There is no one person, a pope-like figure, in Islam, and has never been one from the minute Muhammad died. Immediately after Muhammad died, Islam became Islams. It kept dissolving into factions and continues to do so to this day. It is not dissimilar to the death of the founder of a violent gang, that spawns a whole bunch of contenders for the position, inevitably leading to infighting among the late gang leader’s top lieutenants.

* Any Islamic leader worth his salt would neither dare nor want to issue such a fatwa. It would be like asking a slaveholder who is leading a charmed life at the expense of slaves to free the slaves and start working the cotton fields to earn his bread.

* Furthermore, even if this leader who has bought into the system and has reaped the immensely-valued benefits of his position were to in fact give it all up and come up with this fatwa, he would be immediately defrocked, if not lynched, by his own followers as a heretic who had betrayed the explicit teachings of the holy Quran, which repeatedly urges the faithful to wage war against all kefir, civilians or not.

* Islam is tantamount to violence. Violence is the lifeblood of Islam, and it has been ever since the time of Muhammad in Medina, as is shown by Muhammad’s own example and conduct.

* Without violence of all types, Islam will undergo a slow death. Violence is in the fabric of this cult. Take away violence and you shut down the blood supply from the body of Islams. Islam is violent not only against non-Muslims; it is violent against its own numerous sects and offshoots. Even within every sect and offshoot violence, violence is practiced in the most savage ways. Public lashing. Cutting of hands for stealing even a morsel of bread. Blinding convicts or hanging them. Stoning so-called adulteresses. Castrating sexual offenders and hanging homosexuals. The final outcome of a cult born of violence seems to be death by violence — something like what is going on daily in Iraq and Syria, and to some extent in other Muslim lands. Non-Islamic lands will do well to keep this cult of violence out of their countries and let them practice their systemic violence among their contending sects in their own lands.

Muslim leaders advance to their positions of leadership in Islam’s numerous subsidiaries by cleverly and ruthlessly navigating their way through the hierarchical labyrinth of cutthroat competition. Kissing up and demonstrations of unconditional loyalty to the higher-ups, as well as undeviating total devotion to the charter of the corporation as defined and promoted by the particular subsidiary, while vigilantly exploiting any opportunity for climbing up the next rung of the leadership ladder, are prime requirements of staying in the game.

The individuals who attain high leadership position in Islam have invested their all with great acumen and gone through a tortuous ringer for years in order to attain their positions. The profession of clergy attracts a select segment of men: men who have already significantly bought into the Islamic charter and its methods. As these men undergo formal indoctrination, a culling process takes place. Hundreds of thousands of these men, for a variety of reasons, do not advance very far. The great majority languish in lower ranks for the rest of their life. They are the drones, so to speak. They loyally keep working the rank-and-file Muslim believers at villages and towns, making them toe the line and pay their tributes and cash to their parasitic handlers, who continue their highly successful smoke and mirror charade. A significant number may abandon their ordination altogether, for a variety of reasons, and begin earning their living like the rest of the people.

Another not unimportant complicating factor is that the Islamic leaders actually believe the entire Islamic package, as absurd as much of it may seem to non-Muslims. It is in human nature to start believing even the most absurd after having it preached to you by higher authorities — you yourself will begin to parrot it all repeatedly to others. Millions of Shiites, for example, make a pilgrimage to a well near the city of Qum in Iran in order to pay homage and tribute to the Shiites’ 12th imam, who is claimed to have been hiding there for over a thousand years. No one forces these millions to believe this patently absurd contention, which is successfully hammered in their minds by the purveyors of Islamic fraud — the high divines.

It is also wishful thinking and outright naïveté to believe that Islam is reformable. Islam is interested in reform only in reforming the rest of humanity to its charter of primitive savagery. Realism, not pipe dreams, is needed in the Herculean effort to resist the spread of the oppression of Islam to free nations. This expansionist and authoritarian ideology will not stop expanding on its own. It is determined to conquer the entire world and control each and every human being.

No, Islam has never been a religion of peace. What we need to do is demand that politicians, Islamic apologists, and paid-for media do not abuse freedom by lying about Islam. When these people portray Islam as a religion of peace, they are lying through their teeth. Just take a quick look at Islam’s history, as well as what is happening today in the Islamic lands. Islam is not a religion of peace and it has never been. Islam is violent, oppressive, racist, and irrational at its very core. It is treachery for people to present it as otherwise, either out of ignorance or for their own personal reasons.

Amil Imani is an ex-Muslim from Iran.

You Have Reached The End of the Article but read on....

[ * Non-Denominational = Synchrestic Ecumenism, Disease of Scholasticism, altering the Life and Teachings of Jesus Christ to accommodate the disease of Political Correctness and CULTIC PROTESTANTISM, and the Roman Jurisdiction (Latin Church = Vatican) of the Catholic Church) breaking of - or failure and refusal to respect and abide by  - the ancient Seven Ecumenical "Do Not" Canons which leaves everything else open to God's gift of creativity... failure & refusal to abide by and have respect for those who diligently protect one of the other Pillars of the Church, the Seals of the Confessional, but "Non-Denominational" also includes worshiping Satan's religion of  Islam by praying with them and other heretics such as 'Pentecostalism,' 'Jehovah's Witnesses,' 'Mormons,' 'Church of Christ,' any so-called church with "Community Church" in their nomenclature and others who by their false and misleading dogmas and doctrines are actually against the Life and Teachings of Jesus Christ upon whom and for exacting reason we are called "Christian" in both spirit and truth from which non-denominational protestant sectarian claimants have departed from as being so-called Christian] Only a skilled spiritual father can help you! Remember: You cannot ride two horses or serve two masters for one of them will be harmed by your thoughts, your very words and your actions which is to blaspheme the Holy Ghost (Spirit) who will depart from you.  And when the Holy Spirit departs, the great deceiver (unbeknownst to you) will rush in to fill the void under disguise of being the Holy Spirit!  Testing of the Holy Spirit to insure it is the Holy Spirit does not, for many a Sectarian Protestant, especially those of the very cultic Pentecostal and Roman churches, work - - - because the Great Deceiver (Satan) is most skilled in worming and snaking his charms around your mind and heart to feign being the Holy Spirit.  Remember, Satan has the same gifts similar to the Holy Spirit but Satan's gifts are UN-HOLY and lead all who accept him (unbeknownst to you) to perdition.

"Prejudice makes Prisoners of the Hated and the Hater!"

Institutions include, but are not limited to the following:

+Who We Are and Our present day Living

+Our Rule of Life

Pascha -  Lenten Season & Easter (Much training and material of Understanding to be found at this link...

Our Daily Commemorations for the Living

Our Daily Commemorations for the Reposed

Seminary Training and other educational efforts!

Also Visit: "How to Set Up a Personal Commemoration Book"

The Julian Vs. Gregorian Calendar and other Important Calendar dates

• A Reply to Protestant Sectarians

•An Understanding of the Ancient Canons

• A bit of understanding about the Fundamentalist Cults....

●A Call to become A Soldier in Christ, Jesus

Please click on this link to hear what John F. Kennedy had to say, and then compare it to what is happening today: http://www.infowars.com/articles/nwo/jfk_secret_society_speech.htm

(Notice: Generally our news postings will be on or about Monday, Wednesday & Friday)

About St. Pambo - St. Seraphim of Sarov in comparison to Francis of Assisi

"Do not be afraid! I know that you are seeking Jesus the crucified.
He is not here, for he has been raised just as he said."
Matthew 28:5-6

The following articles and information do not necessarily reflect the attitude or beliefs of this jurisdiction or those who are with us in spirit and truth!

"I understand the idea of sodomy and homosexuality, but to say that homosexuality is not a sin is incorrect and not just in my mind but all of Orthodoxy and again, not just in Orthodoxy but all of Catholicism and again, not simply all of Catholicism but all of Christianity with the exception of those who have this in their personal life as sin or are very close to someone who does." (Ed. Note: We have never said "homosexuality is not a sin or okay... however, there are those who, being homosexual, are that way for a variety of reasons.  The conversion tactics employed by many other groups, bespeaks of a "politics" that is not wholly honest.  For, in their endeavors they have failed to show forth the truth that one is driven into a "closet" styled of life.  It is better, we believe, to become wholly celibate, be it a homosexual and even heterosexual... and to learn what "celibacy" really means and requires).

If a man looks on a woman who is not his wife with lust, he has sinned, if he and she are married to other people he has committed adultery. If a man looks at a man with lust he has sinned the same as a man who looks at a woman. Sodomy does not have to enter into it, lust for someone is a sin and must be removed, now people do this all day long to be sure but it is still a sin. To say that homosexuality is not a sin allows homosexuals to live in sin without repentance and this is wrong to do to them spiritually.

It is for the sake of their own soul that one has to recognize sin that is in them and not to excuse it regardless of the sin or the preference of the sinner. Homosexuality is indeed a sin regardless of sodomy, the act of attraction or the lust is a sin even without action and simply must be repented. I must also add this; woe to all who misguide others into sin and especially those who are of the clergy who do this. For the sake of your own soul and others, you must recognize this and repent. I know that it is not easy to overcome and if it is never overcome then one must live a life of constant repentance, that is the only choice.

he following important articles for the season of Lent:

+ A Monastic Struggler's Story for Lent

+ Begin with Yourself, Then the World